The Wildcat cheerleaders started off their competition season this Sunday, Aug 9 at the Ohio State Fair with a 2nd place finish.  The competition was hosted by AmeriCheer.  This was the first year that the team attended this particular competition in several years.  The team had an exciting, upbeat routine that they executed to near perfection.  They came in 2nd place to a team that won the National Championship last year.  The competition team is made up of seniors Martina Jolly and Emmily Corona. Juniors are Brooke Beattie, Lexi Dejulio and Chelsey Louk; 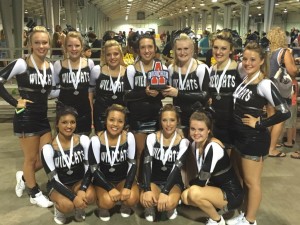 The competition season continues at the Jefferson County fair on 8/19 at 6pm and Buckeye 8 Cheering competition on 8/23 at Buckeye Local high school starting at 2pm.